Mercury Threat to Babies: How the Post Got It Wrong – and Refuses to Make It Right

Mercury Threat to Babies: How the Post Got It Wrong – and Refuses to Make It Right

On Oct. 4, The Washington Post had a scoop: According to a front-page story by Sally Squires, a new report by “top scientists from private groups and federal agencies,” advised pregnant and breast-feeding women to eat at least 12 ounces of fish a week “to ensure their babies’ optimal brain development.” 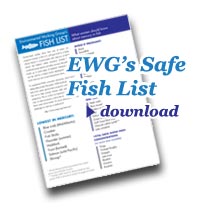 The public health community, including Environmental Working Group (EWG), was stunned. The official guidance of the Food and Drug Administration and the Environmental Protection Agency is clear: To protect babies against mercury, which damages the developing brain, pregnant and nursing women should eat no more than 12 ounces a week of any seafood, no more than 6 ounces of albacore tuna per week, and no shark, tuna, mackerel, or swordfish at all.

But according to the Post, the report from the Healthy Mothers, Healthy Babies Coalition (HMHB) – whose members include the American Academy of Pediatrics, the March of Dimes, the National Institute of Health (NIH) and the Centers for Disease Control (CDC) – urged mothers and mothers-to-be to eat as much fish as they want, even from the government’s do-not-eat list. The Coalition said eating more fish was essential for moms and babies to get enough omega-3 fatty acids — although health experts agree that the solution is to eat other foods high in omega-3s that don’t contain mercury.

Something was fishy. And we weren’t the only ones who thought so.

The answer from Jordan: Yes, the HMHB did take $60,000 from NFI specifically to design a "micro" Web site to promote the new guidelines and to produce other "educational" materials. On further probing, the docs said they hadn't taken any money — though a couple said they'd taken "honorariums" for coming to coalition meetings. At deadline this afternoon, the HMHB still hadn't returned NPR's phone calls seeking more information.

Meanwhile, Aubrey's calls were turning up other problems. The American Academy of Pediatrics told her that the group had no idea it was being associated with the guidelines, with which it disagrees. Strongly. Ditto the March of Dimes, CDC and at least one agency at the NIH. By 2 p.m., we noticed that the list of members on HMHB's Web site was shrinking — the pediatricians were no longer there. (We're still watching.)

More details emerged: In addition to the $60,000 for website development, the National Fisheries’ Institute had paid $14,000 to cover travel expenses, as well as honoraria, for doctors who had served on the panel that wrote the report. NPR was also first to report that the vice chairman of the Healthy Mothers, Healthy Babies Coalition works for Burson Marsteller, a K Street lobbying and PR firm that also represents the National Fisheries Institute and formerly represented the tuna industry.

NPR’s vigilance alerted a number of other reporters, including Tom Pelton of The Baltimore Sun and Lisa Stiffler of the Seattle Post-Intelligencer. Pelton was clear that Squires blew it, but on his blog he observed:

This is a growing problem for reporters. The public relations industry is becoming increasingly well funded and sophisticated, as the number of professional journalists declines. Fewer reporters have less time to check things out -- meaning the world is increasingly dominated by "news" that is really just someone's ad.

The Post wasn’t the only news outlet to omit the Coalition’s industry ties. Reuters initially made the same mistake, but quickly issued a correction. In her blog on Oct. 5, Stiffler noted that more than 48 hours after the front-page story ran, the Post had not bothered to fix its mistake.

What's also troubling about this bait-and-switch story is that the Post hasn't seen fit to write a follow up clarifying this little funding conundrum -- at least nothing I could find.

Over the next two weeks, EWG worked to turn the story around. On Oct. 11, Executive Director Richard Wiles published a blog on Huffington Post that said:

Our organization is in the business of researching chemical threats to human health and fighting to improve protections when they are supported by the science. When we release a report, we expect and welcome thorough scrutiny from reporters and independent experts about our findings, methodology and funding. When a non-peer reviewed "study" recommends dramatically increasing pregnant women's consumption of mercury above guidelines from FDA and leading medical organizations, shouldn't the same standards apply?

There is no controversy about whether pregnant women should avoid fish high in mercury, and reporting this fabricated controversy is more than factually wrong, it is irresponsible and downright dangerous. If mothers-to-be actually followed the industry's advice there would be an epidemic of mercury-damaged children in this country.

Stories in Washington’s City Paper, the watchdog website Media Matters for America and the alternative news service Alternet also set the record straight and called on the Post to acknowledge the error. But the Post was in denial mode. City Paper reported:

“The question of backing from the National Fisheries Institute is one of the first questions that I asked of National Healthy Mothers/Healthy Babies,” writes Squires via e-mail. That line of inquiry, writes Squires, “was one of those things that dropped out of the daily story”—primarily because the $60,000 in funding to the Healthy Mothers group was for dissemination of the information, not for its generation.

On Oct. 12, Wiles wrote to Squires, her editor and Post Ombudsman Deborah Howell. He pointed out that none of the medical associations or federal agencies cited by Squires agreed with the Coalition’s report, and that “several have gone on the record quite pointedly to that effect.” He asked that the Post publish a full correction.

The next day, the Post published a letter from officials from the National Institutes of Health and the Centers for Disease Control, “Why We’re Not Backing This Seafood Suggestion:”

The recommendation by the National Healthy Mothers, Healthy Babies Coalition that pregnant women consume more fish [front page, Oct. 4] has not been endorsed by the National Institute of Child Health and Human Development, the Centers for Disease Control and Prevention, or the Health Resources and Services Administration.

The three agencies, all within the Department of Health and Human Services, were not participants in the formulation of this recommendation, learned about it only after it was announced, have not had the opportunity to review the data on which it was based and therefore cannot support it. These agencies have worked collaboratively with the Healthy Mothers, Healthy Babies Coalition on many projects. However, we are not aware at this time of any new evidence sufficient to change the current guidelines set forth by the Food and Drug Administration and the Environmental Protection Agency, that pregnant women should consume no more than 12 ounces of fish per week. We continue to support those guidelines.

On Oct. 17, the most influential food reporter in the U.S., Marian Burros of The New York Times, published a column that reported the dismay of organizations and agencies that had been falsely listed as endorsing the Coalition’s findings:

Finally, on Oct. 21, the Post finally came clean – though not with a full correction, and not without letting the seafood industry defend its involvement. In her regular Sunday column, Ombudsman Deborah Howell wrote:

NFI spokesman Mary Anne Hansan said the group did not pay for any of the research.

"New and independent scientific research about eating fish deserves a full and fair hearing, which is why the seafood industry openly supported this public discourse," she said. James McGregor, a visiting professor of obstetrics and gynecology at the University of Southern California and convener of the Maternal Nutrition Group, said he asked the NFI for the money because "there's only so many ways to get people together."

Science Editor Nils Bruzelius said he and Squires were aware of the institute money and "in hindsight, I wish we had included it." He said he did not realize that coalition members were not endorsing the advisory. "I had the impression they had endorsed these recommendations, which went into my thinking in offering the story for Page 1."

Squires is writing a column on the controversy for Tuesday's Health section. The confusion over who was endorsing the recommendation should have led to a prompt second story or a clarification.

I've spent the last couple of weeks interviewing numerous scientists, doctors and environmental experts and reading as many scientific papers and reports about methyl mercury, omega-3s, fish and pregnancy as possible. To my surprise, I found a lot of scientific agreement that I hope will help guide your decisions about seafood. . . . Until scientists sort out all the details, many think that the message to the public ought to be eat fish, just make it the fish lowest in methyl mercury, especially when pregnant. That means choosing salmon, sardines, tilapia, anchovies, shrimp and light tuna, not albacore.

That’s a lot closer to the truth. But it still fails to note the important fact that the government advisories are based on the amount of mercury actually measured in fish, and the safest way to avoid too much mercury is to eat no more than 12 ounces of any seafood. And, as for her failure to report the conflicts of interest in the Coalition’s relationship with the seafood industry, Squires says only that those were “omissions I regret.”

What is regrettable is the Post’s weeks of inaction and refusal to do all it can to correct the serious mistakes that were made in its reporting. This was not a movie review with a few typos. This was a front-page article that sent a very clear and potentially dangerous signal to millions of pregnant women across the country that concerns over mercury exposure to babies should be ignored.