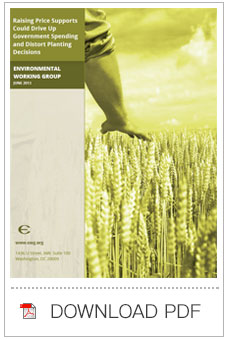 The House and Senate versions of the pending farm bill are supposed to save $47 billion by repealing three subsidy programs: direct payments, counter-cyclical payments and the average crop revenue election. But both bills would then use almost three-quarters of those savings – about $35 billion – to fund a suite of new farm income support programs designed to put a higher floor under crop prices or guarantee average revenues from crop sales.

The House’s “Price Loss Coverage” (PLC) program in particular is essentially a far more generous version of the program the bill repeals. It would:

How the House Proposal Would Work

The Price Loss Coverage proposal follows the basic formula of all farm subsidy programs that trigger payments to producers when market prices fall below a guaranteed level.

PLC, however, would make three important changes to the current subsidy program. It would:

Taken together, these changes increase the risk of big government outlays and retreat from the reforms made to farm subsidy programs since the 1996 farm bill.

The cost of PLC depends on whether actual crop prices fall below the guaranteed prices. This report analyzes two scenarios:

Guaranteeing higher prices increases both the likelihood that payments will be triggered and the size of the resulting payments.

Table E-1 (below) compares the percentage increase in the price guarantee to the concomitant increase in the maximum payment per bushel or per pound that could be triggered under the PLC proposal, compared to the current counter-cyclical program (CCP). Maximum payments for soybeans are fi ve times higher, for corn and rice three times higher, and for wheat almost twice as high as under the current program. Already very high maximum payments for cotton and peanuts would rise by 30 percent and 80 percent, respectively.

PLC payments would total $1.9 billion a year less than current direct and counter-cyclical payments over the next five years if prices hew to the levels projected by CBO. If actual prices fall by as little as 15 percent below the projected prices, the cost of PLC would balloon to $6.9 billion a year, 140 percent more than under the baseline price scenario and 40 percent more than under current programs.

The 1996 farm bill made a much-heralded advance in farm policy by decoupling farm subsidies from farmers’ production decisions. Farmers could decide which crops and how many acres to plant based on price signals from the market, rather than on the level of government support. Farmers, in other words, would no longer farm the government, instead of the market.

The House’s PLC proposal marks a troubling retreat from that important farm policy reform. The higher price floor and payments tied to actual acres in production recouples farm income support to farmers’ production decisions. Farmers will once again have incentives to farm the government as well as the market.

Because the United States is the largest exporter of several subsidized crops, PLC could have significant effects on global prices, production and trade and erode the much sought-after gains in export markets that U.S. producers have enjoyed under current trade agreements.