While California struggles to find enough affordable energy and water to meet its needs, agribusinesses in the Central Valley are getting taxpayer-funded power subsidies worth more than $100 million a year to transport irrigation water, according to an Environmental Working Group (EWG) investigation that calculated, for the first time, federal power subsidies given to each of the almost 100 water districts in the Central Valley Project (CVP).

Irrigated agriculture consumes a staggering amount of energy. With the electricity needed to move agricultural water around the CVP in one year, all of the homes in Chico could be powered for more than 18 months.1[1,2] As California consumers struggle to pay rising energy bills and the state scrambles to find adequate energy supplies, 800 million to 900 million kWh a year are given away to agribusinesses almost for free, creating a massive federal subsidy that discourages both energy and
water conservation. [3,4]

EWG calculated power subsidies in the CVP for the years 2002 and 2003 by comparing the electricity rates Bureau of Reclamation charged agribusinesses to those charged by Pacific Gas & Electric (PG&E), the major power provider in the CVP service area. 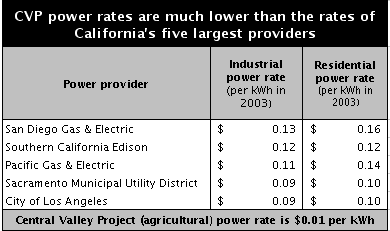 1According to the Department of Energy, in 2005 the average per capita residential electricity consumption in California was 572 kWh per month.
2Comparison to five largest power providers was only conducted for 2003 due to data availability.

‹ Power Drain How the CVP Works ›