Every year, the Central Valley Project (CVP) moves more than 2 trillion gallons of water - about 18 percent of California's fresh water supply - to thousands of farms in the state's arid heartland. Massive pumps push the water through 1,437 miles of canals. The electricity used in one year to move water around the CVP would power all of the homes in Chico for more than 18 months, and at current Pacific Gas & Electric Co. rates, cost customers more than $100 million.

But farms in the CVP, the largest taxpayer-funded federal irrigation system in the country, pay next to nothing for the power that provides their lifeblood. Rates for the staggering amount of electricity needed to move CVP water are not affected by the volatile energy market that has hit other California power customers since 1992, nor are they regulated by state or federal agencies.

In a 15-month investigation, Environmental Working Group (EWG) found that in 2002 and 2003 some of the nation's largest and richest farms paid for CVP power at just a fraction of what PG&E's residential, industrial and agricultural customers paid. The rock-bottom rate the CVP charges agribusinesses amounts to an energy subsidy worth more than $100 million a year, bankrolled by U.S. taxpayers. That's how much more agribusinesses in the CVP service area would pay for electricity from PG&E; the rates paid by PG&E residential customers are even higher. 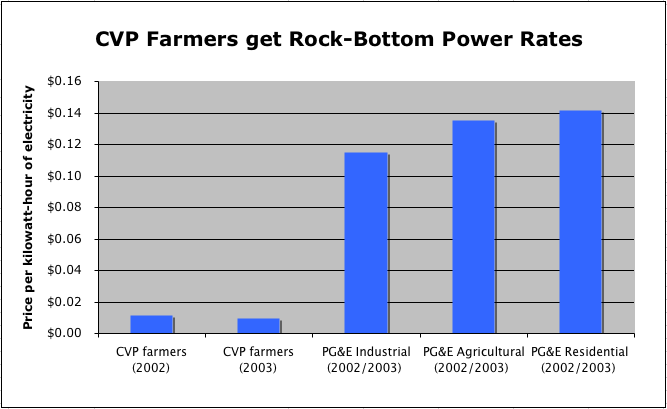 
Through the federal Freedom of Information Act, EWG obtained U.S. Bureau of Reclamation documents that enabled us to calculate for the first time the rate paid by CVP agribusinesses and the value of their power subsidy.

The Bureau often downplays the amount of energy it takes to run the CVP, pointing to the fact that the Project's hydroelectric plants generate about five and a half billion kWh each year compared to the approximately 1 billion kWh required to pump irrigation water around the system. Yet this argument ignores the fact that while millions of municipal and industrial users benefit from the "left over" power, fewer than 7,000 private agribusinesses benefit from the power used for pumping.

And while Congress intended to subsidize agricultural water to some degree when it authorized the construction of federal water projects in the early 1900's, the current situation in the CVP is radically different than what the lawmakers envisioned. Congress specified that water subsidies should only be given to small family farms, yet today corporate agribusinesses thousands of acres in size are receiving federal subsidies. The original purpose of the subsidies - to help settle the then sparsely populated Western US - is also clearly obsolete.

Moreover, many CVP agribusinesses are enjoying not just one kind of government subsidy, but several. In addition to federal energy subsidies, Department of Agriculture data show that from 1995 to 2004, CVP agribusinesses received more than $890 million in direct commodity payments, mostly for cotton and rice. An earlier EWG investigation conservatively estimated the value of CVP water subsidies at $416 million in 2002. In total, federal subsidies to the CVP easily top more than half a billion dollars a year and could well reach $1 billion Ð all at taxpayers' expense.

Meanwhile, the CVP has racked up many other real costs, both ecological and economic. More than half of the Trinity River's water is rerouted from its original course and diverted into the Sacramento River to be used for irrigation. Massive pumps from both the CVP and the State Water Project reverse the flows in the Sacramento-San Joaquin Delta and severely impact fish populations. The Friant Dam drained a 63-mile stretch of the San Joaquin River of water, preventing it from reaching its terminus for parts of the year and destroying a once teaming salmon fishery, for the sake of cheap irrigation water.

Billions of dollars have already been spent trying to repair some of this ecosystem damage. Undervaluing CVP power only adds to these costs. If you have a water delivery system that requires massive amounts of pumping, and you undervalue the power used for this pumping, this leads very directly to the undervaluing of the water itself. Undervaluing of any resource leads to overuse. More water being used for irrigation means less water being left for the environment and less power being available for other uses. This is a particularly pressing issue considering that since the botched deregulation of the California electricity market in 1992, the volatile energy market has caused periodic brownouts in the state's major cities and spurred a push to build new power plants.