Dourson has been nominated to lead the Environmental Protection Agency’s Office of Chemical Safety and Pollution Prevention, which oversees the agency’s work on chemicals and pesticides. Since 1995, Dourson has run a “nonprofit” organization called Toxicology Excellence for Risk Assessment, or TERA, which gets 30 to 40 percent of its funding to produce studies for the chemical industry, which usually favors weaker safety standards.

Industry-funded studies made up more than half of the studies peer-reviewed by TERA since 1995. TERA also provides expert witnesses for chemical companies involved in lawsuits. TERA has taken funding from the American Chemistry Council and others to create the incredibly misleading – and now inactive – website www.kidschemicalsafety.org, which downplayed the risks of chemical exposure for children. In his long history of working for the chemical industry, Dourson has consistently fought to weaken proposals to protect our families from dangerous chemicals, including chemicals linked to cancer, brain damage and reproductive harm.

Here are a few examples: Dourson and TERA helped DuPont avoid liability for damages from PFOA pollution. PFOA is a dangerous chemical used to make Teflon, and is linked to kidney and testicular cancer, thyroid disease, immune deficiency and other health problems.

In 2000, not long after widespread contamination was discovered from the use of PFOA, the state of West Virginia hired TERA on DuPont’s recommendation to determine a safe level of the chemical in drinking water. DuPont recommended TERA after an employee lauded TERA and Dourson as enjoying “a very good reputation among the folks that are still in the business of ‘blessing criteria.’”

TERA’s 2002 risk assessment helped West Virginia set a safety threshold of 150 parts per billion for PFOA in drinking water. That level is 150 times higher than the maximum safety level of 1 ppb that DuPont’s own scientists determined in 1991. In 2016, the EPA set a national drinking water health advisory level for PFOA at 0.07 ppb, thousands of times more protective than TERA’s 2002 recommendation.

Even as the risks of PFOA have become better understood, Dourson has continued to defend the chemical on behalf of DuPont. In 2015, DuPont paid Dourson to testify in its defense of a lawsuit brought by an Ohio woman who alleged she contracted kidney cancer from drinking water contaminated by PFOA emitted from DuPont’s Parkersburg, W.Va., plant. 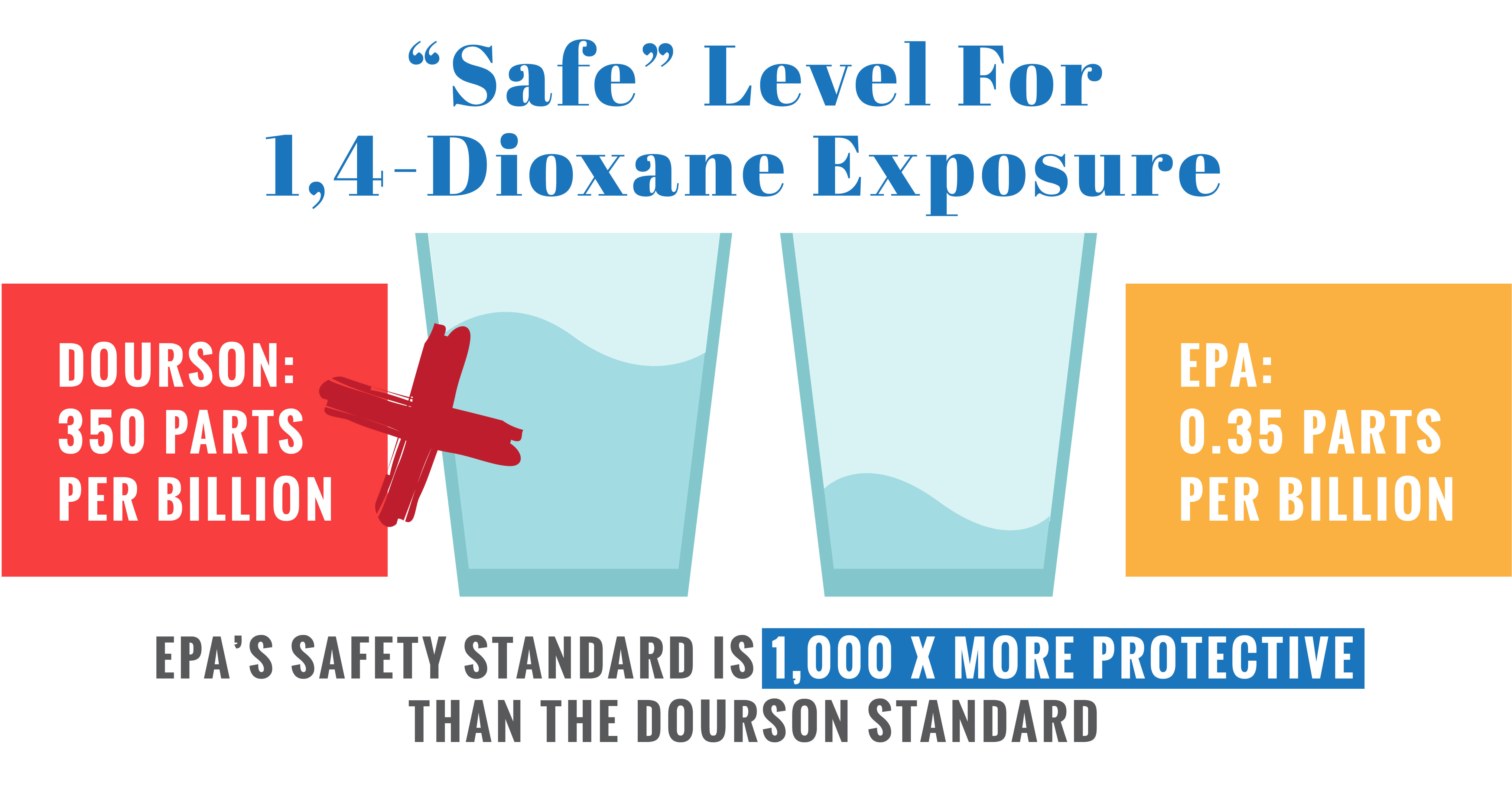 Dourson sought to dramatically weaken the safety standard for 1,4-dioxane, an industrial chemical used in chemical processing that is also found in personal care and cleaning products, and which frequently contaminates drinking water. 1,4-Dioxane is linked to cancer, liver and kidney damage, lung irritation, and eye and nose irritation.

Dourson authored two papers, released in 2014 and 2017, that argued 350 ppb is a safe 1,4-dioxane exposure level for people. However, this level is 1,000 times greater than the EPA’s increased cancer risk level of 0.35 ppb. Dourson’s 1,4-dioxane research was funded by PPG Industries, a manufacturer of paints and coatings, whose 1,4-dioxane releases have contaminated public water supplies near its facilities.

In 2015, scientists at the Michigan Department of Environmental Quality reviewed the arguments presented by Dourson and found that the “available scientific information regarding the carcinogenicity of 1,4-dioxane does not support TERA’s hypothesis and are insufficient to deviate” from the EPA’s assumptions used to calculate the potential for cancer risk.

1,4-Dioxane is one of the first 10 chemicals that will be evaluated under the updated Toxic Substances Control Act. The office Dourson has been nominated to head will be responsible for the risk evaluation and subsequent regulation of 1,4-dioxane.

Dourson also proposed a weaker standard for 1-bromopropane, a solvent used in degreasers, aerosol solvents, spray adhesives and dry cleaning. It is linked to neurological and reproductive disorders, as well as cancer. It can also cause irritation to the eyes, skin and upper airways.

Scientists at TERA, including Dourson, studied 1-bromopropane in 2004 with funding from Albemarle Corporation and Ameribrom, Inc. That industry-funded study proposed an occupational exposure limit, or OEL of 20 ppm. That’s half as protective as the 10 ppm limit proposed by the American Conference of Governmental Industrial Hygienists a year later in 2005, and 200 times less protective than the revised 0.1 ppm limit recommended by ACGIH in 2014. The National Institute for Occupational Safety and Health recommended an OEL of 0.3 ppm in 2016, 67 times more protective than TERA’s finding.

Like 1,4-dioxane, 1-bromopropane is one of the first 10 chemicals that will be evaluated under the updated Toxic Substances Control Act. The office Dourson has been nominated to head will be responsible for the risk evaluation and subsequent regulation of 1-bromopropane.

Dourson also argued in favor of allowing the use of chlorpyrifos – even though the EPA’s scientists recently recommended that children between the ages of 1 and 2 years do not consume more than 0.0017 micrograms of chlorpyrifos per kilogram of bodyweight per day. Chlorpyrifos is an insecticide that can affect children’s brains and nervous systems, even at low doses, and it has been linked to increased incidences of ADHD. In October 2015, the EPA announced that it could no longer attest that the pesticide was safe on food, and proposed a ban. Despite the known health risks, the EPA abruptly reversed course in March and dropped its proposed ban, allowing the pesticide to remain in use.

Dourson has advocated for the EPA to adopt a safe level of chlorpyrifos instead of a ban. In a 2006 study funded by Dow AgroSciences, Dourson suggested that it would be safe for kids to consume 10 micrograms of chlorpyrifos per kilogram of bodyweight per day – a level more than 5,000 times less protective than the limit recommended by the EPA in 2016. Dourson testified on behalf of CropLife America, a trade association for pesticide producers, in April 2016 in opposition to the proposed ban, CNN reported. Dourson has also argued in favor of using trichloroethylene, or TCE, which is “carcinogenic to humans by all routes of exposure” according to the EPA, and is also associated with developmental and reproductive harms. TCE gained infamy when many residents, particularly children, developed cancer after drinking contaminated water in Woburn, Mass., as documented in the book and movie “A Civil Action.”

Nevertheless, Dourson has conducted industry-funded research in support of continuing to use TCE. Dourson completed an American Chemistry Council-funded study on TCE air levels, which found that the safety range for TCE exposure was one and a half to 15 times higher than the level recommended by the EPA in 2011. The EPA has since proposed banning some uses of TCE.

TCE is one of the first 10 chemicals that will be evaluated under the updated Toxic Substances Control Act. The office Dourson has been nominated to head will be responsible for the risk evaluation and subsequent regulation of TCE. Dourson will also be responsible for deciding whether to finalize or abandon the agency’s proposed bans of TCE in vapor and aerosol degreasing and in spot cleaning. 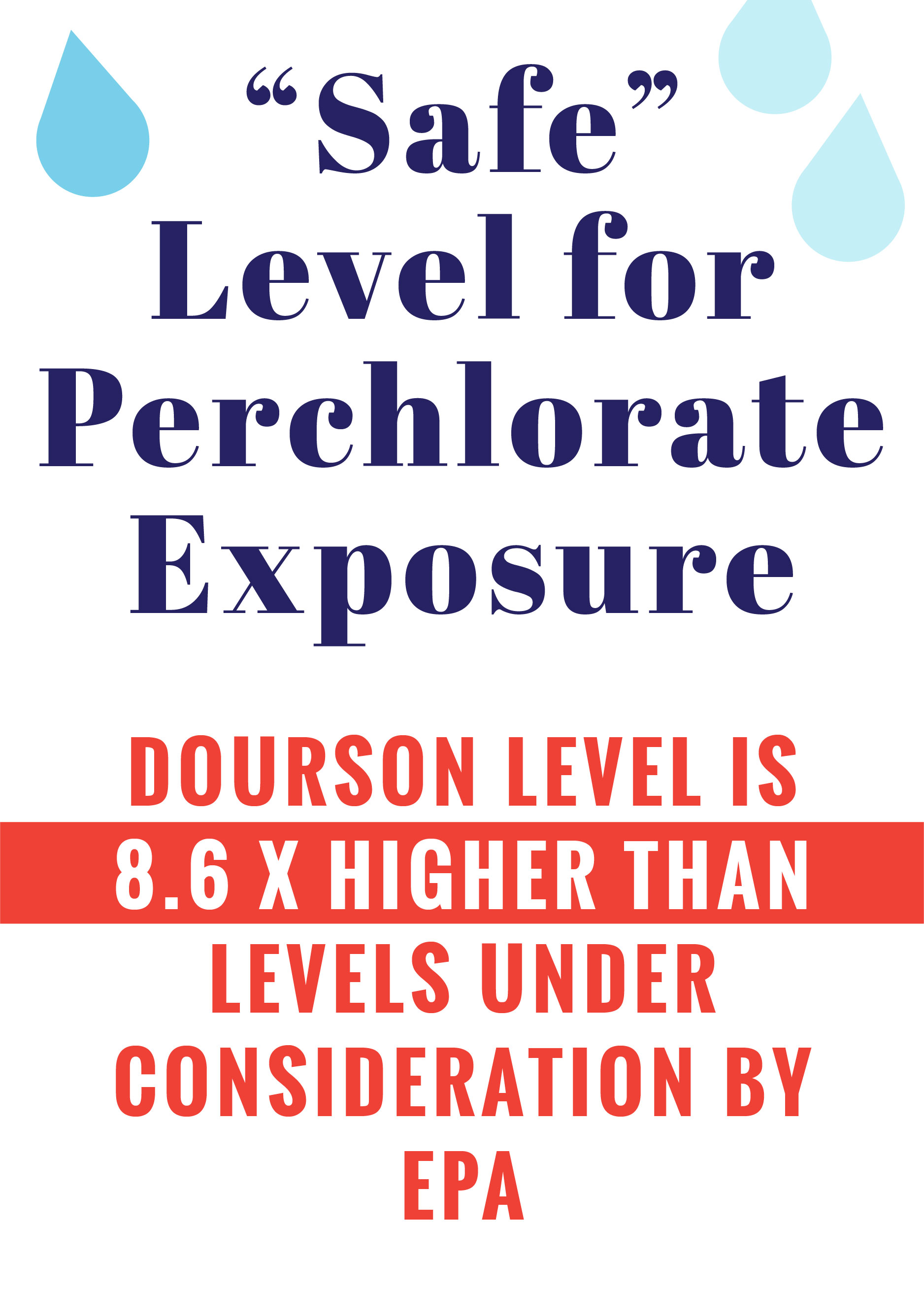 Dourson has long downplayed the risks posed by perchlorate, a toxic chemical component of rocket fuel that disrupts the thyroid and contaminates the drinking water of as many as 17 million Americans. In 2009, the Centers of Disease Control and Prevention found perchlorate in 15 top-selling brands of infant formula. The EPA announced in 2011 that it would regulate perchlorate in drinking water, but it has failed to do so. The Natural Resources Defense Council sued the EPA in 2016 for its failure to set this drinking water standard.

Dourson has a long history of defending perchlorate. In 2005, he co-authored an article casting doubt on whether perchlorate could be hazardous to vegetarians and vegans, and also co-wrote a journal letter stating that perchlorate exposures more than 100 times higher than the level under consideration by California did not cause harm. In 2012, Dourson helped write another article criticizing the EPA’s proposed standard for perchlorate for having an “overly conservative safe dose” and argued that there was no need to factor in safety for pregnant women.

Dourson has received funding in the past from the Perchlorate Study Group, which is made up of perchlorate manufacturers and users. The group has used Dourson’s research to try to undercut and weaken pending federal regulation of perchlorate in drinking water. Because of this work, Dourson was asked to recuse himself from a 2013 EPA Science Advisory Board meeting reviewing an EPA report on perchlorate. Despite this recusal, Dourson still provided comments as a “public commenter” criticizing the report.

Dourson has also sought to weaken standards for diacetyl, a chemical added to food and other products for flavor and aroma. It is perhaps best known for providing butter flavoring on microwave popcorn. Diacetyl can cause “popcorn lung” or bronchiolitis obliterans, a permanent and sometimes fatal lung condition in workers. Diacetyl can also burn the eyes, cause nose and throat soreness, and irritate the skin.

In 2005, TERA scientists produced a study funded by ConAgra finding a safe level of 200 parts per billion. A critique of that study found that this level was “orders of magnitude higher” than the 10 ppb recommended by the American Conference of Governmental Industrial Hygienists and the 5 parts per billion recommended by the National Institute for Occupational Safety and Health.

Dourson has also sought to undermine drinking water standards for the breakdown products of alachlor and acetochlor, two herbicides manufactured by Dow and Monsanto. The two herbicides are linked to cancer, endocrine disruption, and liver, kidney and spleen damage. They create toxic degradates when they break down in the environment. Both herbicides have been banned by the European Union.

In 2009, Dourson and TERA helped Dow and Monsanto propose far weaker state drinking water standards for the herbicide breakdown products in Wisconsin and Minnesota. When the two states began considering how to regulate the herbicides, Dow and Monsanto paid TERA to convene a panel to review the literature and come up with its own “safe” standard for exposure. TERA’s work resulted in an article advocating drinking water limits up to 280 times higher than the limit adopted by Wisconsin regulators, according to an analysis by the Center for Progressive Reform.

Dourson has also supported efforts to defend food chemicals linked to cancer. Acrylamide is a chemical contaminant that can form when starchy foods like potatoes are cooked at high temperatures, as they are for frying and roasting. It is commonly found in french fries and potato chips.

In 2008, Dourson lead a study on acrylamide funded by major food companies, including Burger King, Frito-Lay, Heinz, KFC and McDonald’s. According to an analysis by the Center for Public Integrity and Inside Climate News, the risk assessment by Dourson and colleagues was “10 times less protective than the EPA’s [oral] cancer risk for acrylamide.”