Industrial chemicals in mothers and daughters: The pollution we share and inherit

Industrial chemicals in mothers and daughters: The pollution we share and inherit

The unique bond between a mother and daughter starts in the womb and evolves over a lifetime, as each adapts and grows with the other in an elaborate interplay of nature and nurture. Shared bonds of common genetics and a common environment — their home, the air they breathe, and the food they eat — inextricably link daughters and mothers. Now, new laboratory tests of mothers and their daughters show that these same two facets of nature and nurture — genetics and environment — combine to create another, unwanted aspect of the ties that bind: a common body burden of industrial chemicals.

Tests commissioned by the Environmental Working Group of four mothers and their daughters found that each of the eight women's blood or urine was contaminated with an average of 35 consumer product ingredients, including flame retardants, plasticizers, and stain-proof coatings. These mixtures of compounds found in furniture, cosmetics, fabrics, and other consumer goods, have never been tested for safety.

These and many other chemicals are building up in the bodies of all Americans. But EWG's tests found three eye-opening trends about pollutants that can pass through a mother's placenta or breast milk into her daughter's body: 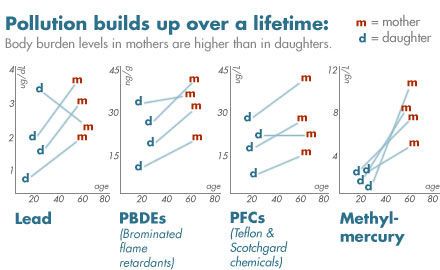 The mothers and daughters in this study join 64 other people tested in six EWG biomonitoring programs conducted between 2000 and 2006, including a study published in July 2005 of 10 newborn babies with an average of 200 industrial pollutants, pesticides, and other chemicals in each child (EWG 2005). In total, EWG biomonitoring has found 455 different pollutants, pesticides, and industrial chemicals in the bodies or cord blood of 72 different people. By any measure this is an astounding number of contaminants — a burden of pollution that is made even more troubling by the lack of health studies or safeguards for their individual or combined toxic effects.


The pressing need for change. Exposures in early life heighten concerns over health risks from these exposures. EPA studies show that children from birth to age two are 10 times more sensitive to carcinogens than are adults (EPA 2005). A new study from UC Berkeley shows that children may be up to 164 times more sensitive than adults to neurotoxic pesticides called organophosphates (Furlong et al. 2006), and innovative research from Washington State University demonstrates that chemicals can confer toxicity four generations after exposure, by forcing permanent, heritable changes in gene expression that can change the body's ability to metabolize and excrete toxic chemicals (Anway et al. 2005).

But even in the face of growing evidence of health risks from chemicals, particularly for children, the government has been slow to act, as demonstrated by three important, pending federal and state initiatives:

All of these measures, if passed and implemented, would dramatically advance our understanding of health impacts from chemical exposures, and would go a long way toward sealing the gaps that leave mothers, daughters, and others at risk from the human body burden of industrial chemicals.